The history of Kailasanathar Temple dates back to 5th century. RajaSimha Pallava started the construction and was completed by his son Mahendra Varma Pallava. Because of its unique architecture style Archaeological Survey Of India has declared this temple as a vital archaeological Monument. Also tourist can see the entire structure was built using the limestone. The fresco styled paintings and sculptures on the walls and dome are inspiring. Locals say that Kings stayed within the temple complex during the war. The ruins of escape tunnel are a standing example for the above said fact. Huge statue of Nandheeswar (Bull, the vehicle of Lord Shiva) calmly welcomes the visitors. During Maha Shivrathiri, people around the city visit the temple and offers the prayer. The dancing posture of Lord Shiva and his consort Goddess Parvati which is sculpted on huge rock panel is a feast to our eyes.

Being built in 4th century by Cholas, Temple is dedicated to Goddess Parvati, the consort of Lord Shiva. Here the Goddess is termed as “Kamatchi Amman” and she has Goddess Lakshmi and Goddess Saraswathi as her eyes. Kanchi Kamatchi Amman Temple is one among three religious centers for Shakthi Worship including Madurai Meenatchi Amman and Varanasi Visalatchi Amman Temples. Gayathri Mandapam has Sanctum Sanctorum facing Southeast direction. Amman idol has a Yantra in front of it. In ancient times, there were Champaka Tree Groves surrounds the area where there is a . Mandapam in present days. The Kanchi Mutt manages and administers the temple. As per Hindu Mythology, Devas came down to earth in the disguise of parrot and worshipped Goddess Kamatchi. The tower over sanctum sanctorum is weaved out of golden plates and also there is a Golden Chariot in the temple which is dragged in procession around the temple every Friday at around 7 p.m. Adi Shankaracharya, an ancient Hindu Sage is believed to establish this temple.

The temple is located on the northern part of Kanchipuram. Amidst of 23 acres of land, with tallest tower of 59 m high, the temple is termed as one of the tallest tower in India. In this temple Lord Shiva is worshipped in the form of “Earth”. Thus the temple is one of the “Panchabhootha Sthalam” (Five nature elements, namely Earth, Water, Air, Sky, and Fire). There are two versions of mythologies regarding the temple. One says that while Lord Shiva was busily creating, destroying and obstructing the lives in Universe, Goddess Parvati closed his eyes which made the Universe to come to standstill. Due to this serious mistake, Lord Shiva cursed her to be born on Earth. Then Parvati framed a Shiv Ling out of Mud (Earth) on the banks of Kampa River and meditated. She overcame all obstacles caused by Lord Shiva with the help of Lord Vishnu. Later impressed by her act, Lord Shiva married her in the meditating spot. However, the second version goes like, Goddess Parvati was cursed with ugly face by Lord Shiva over a fight and she came down to earth and meditated under Mango Tree on Kampa River. Later Lord Shiva was moved by her gesture and bestowed her with beautiful face. Tourists can see this mango tree on the Parkara of the temple. Also four branches of this tree represent four Vedas. People here say that the mangoes on these four branches have four different tastes. The temple was built by typical Dravidian style of architecture by Cholas and later renovated by Vijayanagar Emperor. Yantra or Chakra Peetam which represents the Goddess is placed in front of the Deity unlike the rest of temple where the Yantra is placed in basement of Deity.

One of the 108 holy abode of Lord Vishnu, Varadaraja Perumal Temple is an important pilgrim center for Vaishnavites. It is believed that all 12 Vaishnavite saint poets (12 Alwars) visited this temple in ancient times. During 1st century Pallava King had established the temple. Later in 14th century Chola King added one more Gopuram and wall. Sprawling across 23 acres of land, the temple has three main enclosures namely Alwar Prakaram, Madai Palli Prakaram, and Thiru Malai Prakaram. The hall with 100 pillars with sculptures from Ramayana and Mahabharata Epics is an extravaganza masterpiece of Vijayanagar Architecture. On the ceiling over sanctum, tourists can see beautifully carved and gold plated Lizards. As per Hindu Mythology, Indra, the King of Devas installed these lizards as they witnessed the ordeal of revelation from curse with the help of Goddess Saraswathi. Tourists must worship the “Perundevi Thayar” Shrine in outer enclosure before worshipping Varadaraja Perumal Deity. Various sub shrines, enormous sculptures, exquisite carvings etc. of this temple will attracts its visitors again and again. Also don’t forget to taste some slurping delicacies prepared in the Madapalli (Kitchen) of this temple which is offered as Prasadam to devotees.

Being located on the Sangeetha Vidwan Nainar Pillai street, Kanchi Kudil is an heritage museum which takes the tourists to the ancient social, cultural,religious, and architectural legacies. This 90 year old house characterizes the lifestyle of agricultural family. Tourists can see the entire house was segmented as Master’s Chamber, Women and Children rooms, Verandah, Kitchen, airy courtyard etc. Replicas of Kanchipuram temples and monuments are well maintained here. Live demonstrations performed by artisans and craftsmen are enticing. Tourists can collect some exquisite souvenirs from Kanchi Kudil.

We pick from any part of Chennai or suburban of Chennai. 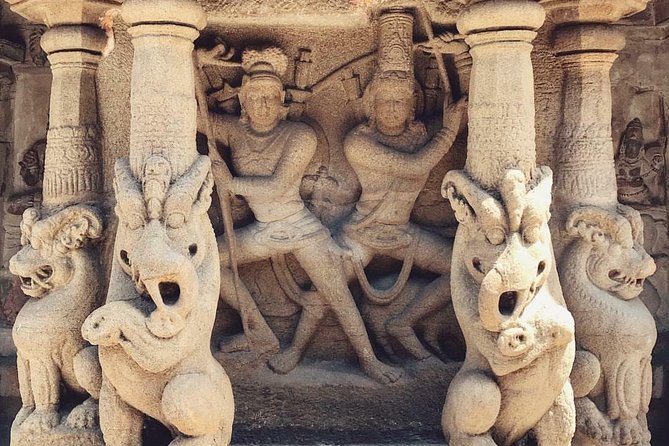 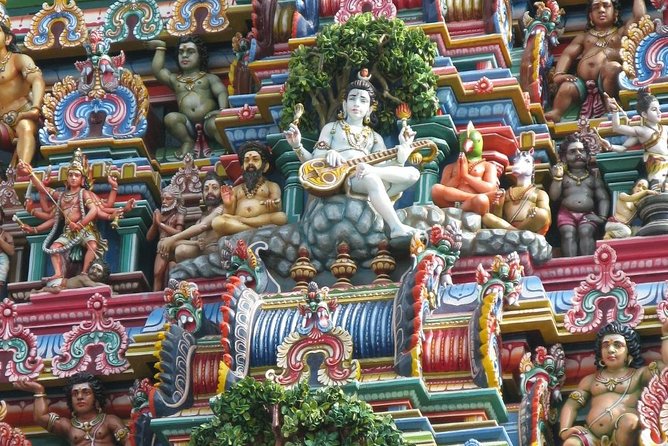 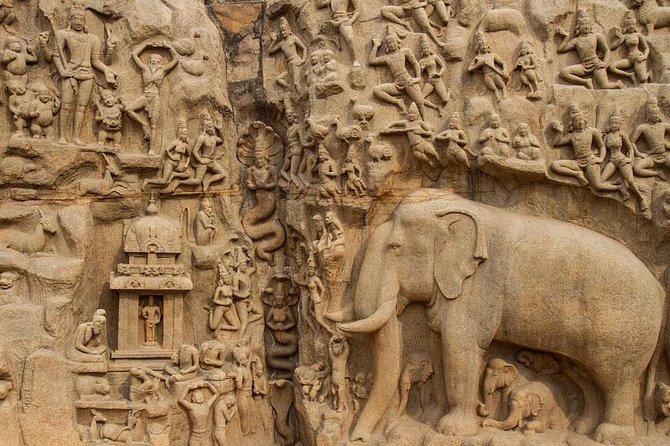 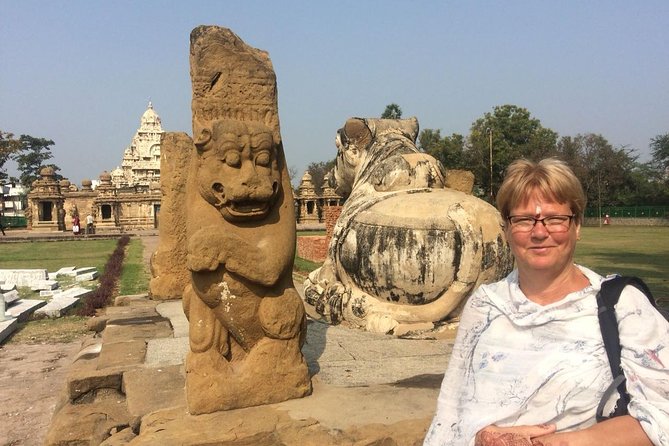 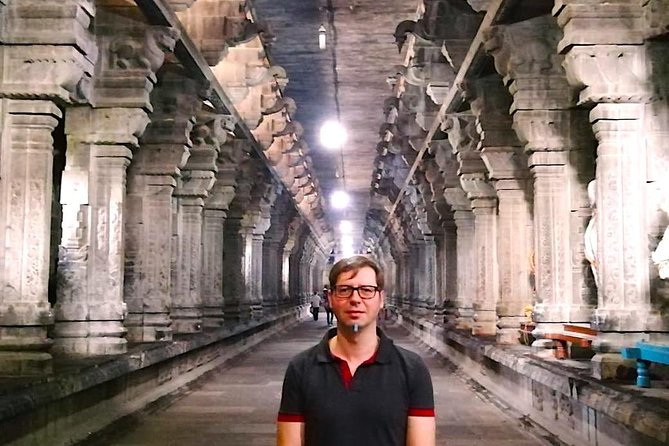 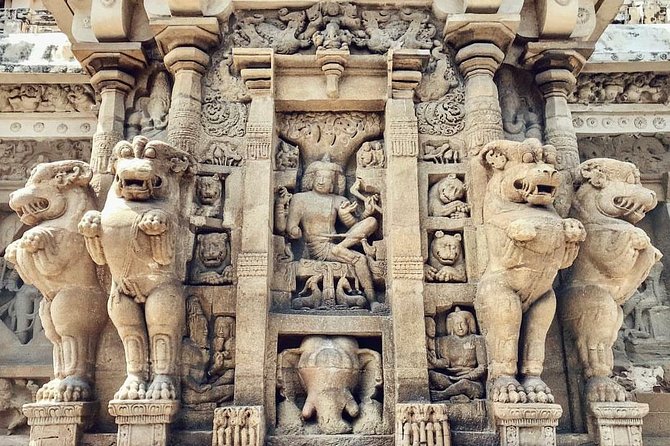 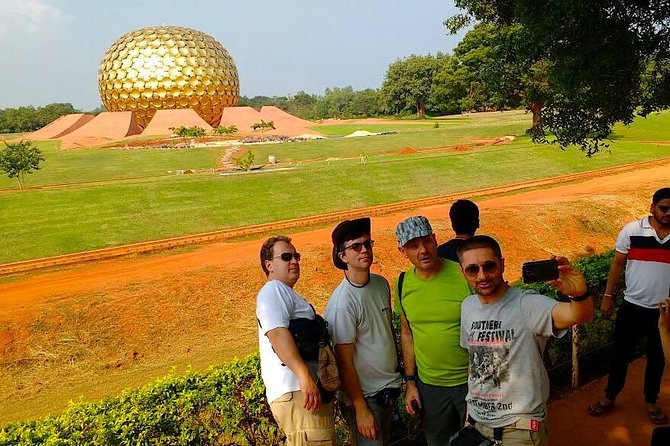